Obviously, a song my generation totally identifies with the 1990’s film Ghost but as a lover of old movies, I was amazed to discover that it had been written by Alex North, composer of so many of the great movies, Spartacus, Streetcar Named Desire and Cleopatra being just a few. I knew I wanted our version to be as simple and as pure as possible, and so we gave it a flowing 12/8 time signature with a piano accompaniment that never seems to stop; Joe Atkins’ elegant fingers gliding over the keys.

I asked the amazing Tony Levin to put a bass line on it as I wanted that aural space between the high vocal line and the earth-movingly low bass with only the rippling piano between us. Then Chris Porter sprinkled his magic over it and enveloped the whole track with an almost eerie sound.  I’d said to him that I wanted to evoke a kind of Eva Cassidy world with this song and he knew exactly what I meant.

I love to find songs that aren’t so well known and there are all sorts of ways of doing of that now that we are blessed with the dark arts of Spotify! I actually came across this track on Facebook as a friend had posted it on her wall, reminiscing about the time she and a girlfriend had been to see Michael Feinstein in concert. I had never heard the song before, and I totally fell in love with its sentiment. It is an absolute joy to sing as you feel completely enveloped by its rich harmonies and its beautiful lyrics. It’s a song that somehow seems to totally bypass the brain and take a direct route to the heart.

I’ve Got A Feeling I’m Falling

For me it all starts with Fats Waller. I was playing his records and destroying his glorious music on the piano from a very early age! I’ve sung this song in so many different ways over the years (usually after a few drinks at a party!) but I wanted to create an arrangement here that captured the utter joy and the sheer life-force of the man.

We had such a ball recording this at Real World studios and i think you can totally hear that in the playing. From the flinger clicking (I kept getting told off for laughing) to Steve walker’s amazing trumpet solo in the middle right through to the boys all jamming on the outro. It just makes me beam so I guess it’s doing its job.

My sister and I used to sing together in close harmony when we were children. It’s really where I learnt everything about harmony and shape, and this was one of the songs we used to sing. These songs from the 1920’s are in my DNA and I never cease to be amazed by how timeless they are. I knew I wanted to include the verse which is so often overlooked and has the most remarkably beautiful chord progressions. My pianistic skills are limited to say the least, so I brought in the cavalry in the shape of the extraordinary talent that is Joe Stilgoe.

I sent him a dodgy voice memo with me fiddling around at the piano to give a sense of structure and feel and then we met at RAK studios and had a wonderfully indulgent time playing around until we found our version. Because I myself am a mixed bag of styles and influences, I decided to shake it up a bit and add Tony Levin’s genius to the track once more and the result is every bit as haunting and as heartbreaking as I’d hoped. At 5.23 it runs as the longest track on the EP but I just didn’t have the heart to cut it- I wanted to keep every bit of it for myself. 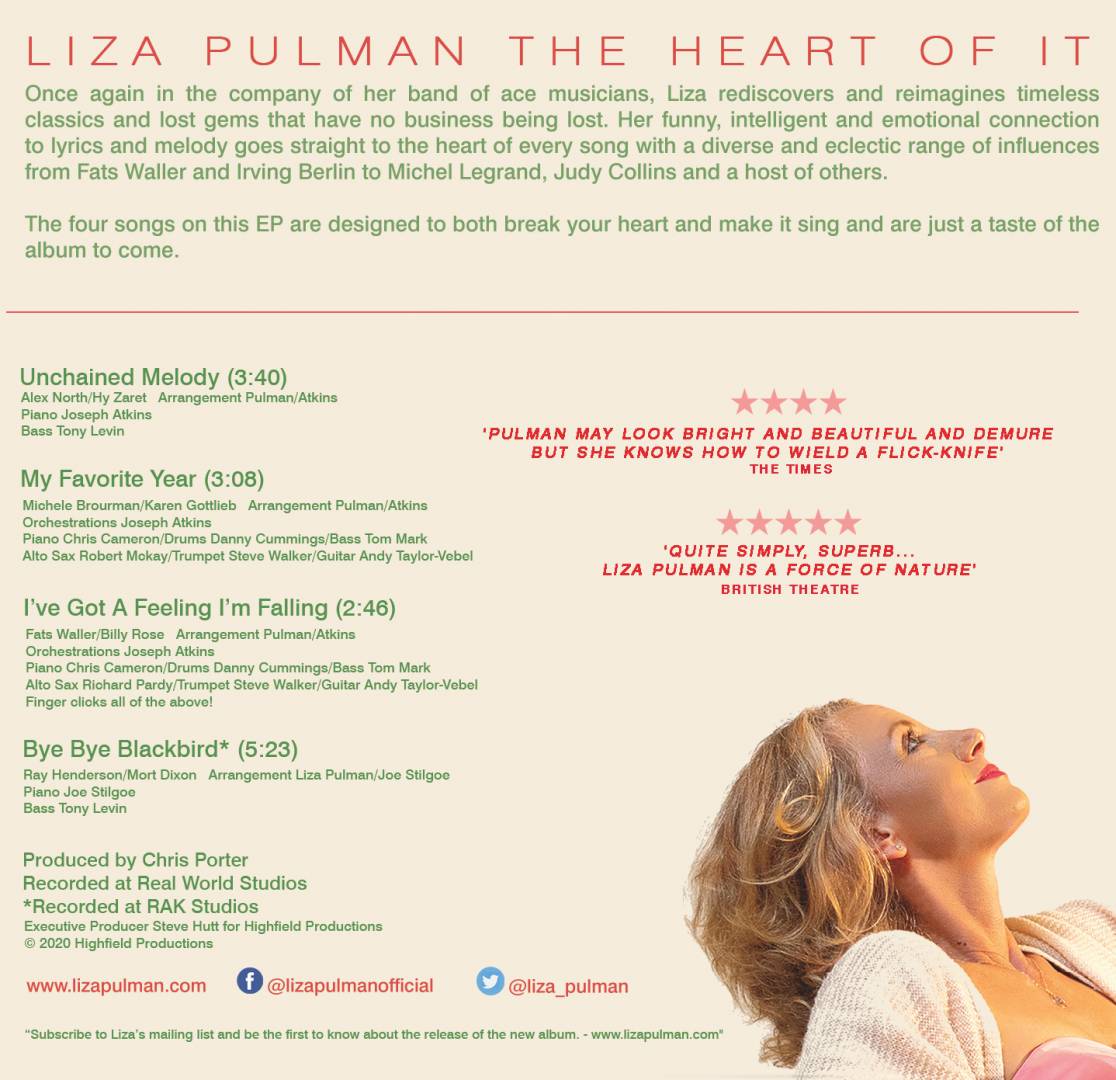